A Friday night without beers, I think I was in second grade the last time I did not have a beer on Friday night!

Market Operations and Observations
I did some work last night using the iBankCoin PPT because I am feeling better than I have in two weeks. I built a new screen that I think will be pretty cool. I did not find a stock that was quite what I was looking for (screens reset every day) but a close one was GFIG. I figured close enough and opened a position today. Maybe over the weekend I will go over what I was looking for.

I opened another position today, but this one was 100% based on a great observation, then a big time call by the best market operator I know. The idea was found in the iBankCoin 12631 Premium section of the PPT so I cannot disclose what it was, it is a paid service. Should the maker of the call disclose it later next week, I will let you know what it was. It was a long position.

A couple of observations today. The first was a chart found at TRB and FT Alphavillewhich showed that after fake AAA rated debt about killed the financial system a couple years back, it is now moving down in size exploding in size as sovereign debt goes parabolic. In case you don't know, sovereign debt is the old toxic debt just bought by central banks but masked as newly rolled out AAA stuff. Unreal, games only real adults can play with the lights on. Here is the chart: 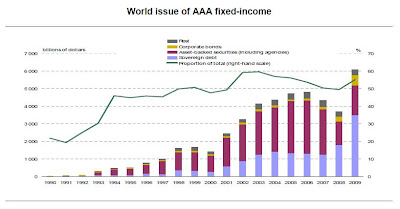 Second observation is from an article on Minyanville that finally captures what I think has been so strange about markets since the big bottom in 2009. Ask Atlantic Capital Management:


It used to be said that stocks climb a wall of worry under constant pressure of potential bad news that could derail the risk appetite of a broad spectrum of the investor class. When bad news came, corrections used to be much sharper and far more compressed than the upward moves that preceded them.

In so many ways, we are now living out a Far Side cartoon, including the general inversion of process and logic. For six consecutive weeks, stock sellers rode the wall of worry; not over news, but over the idea of missing out on the next massive rally. That downward trend was the cautious move, the slowly developing inclination developed by actual data. Rather than the traditional trend of investors deploying capital capriciously and carefully, yanking it out quickly at the first sign of trouble, we now see investors sell carefully at a very measured pace and then rapidly buy at the first sign of a potential rally. Just like bad news that used to jolt the old market into correction, Greece happened to get “fixed” and stocks were off to the races.

Screen Test
With the "Harry Potter" films wrapping up now may be a good time to check out a screen test for the 3 major stars back when they were just little kids:
Io9: Harry Potter Screen Test

Debt Ceiling
If the debt ceiling is not raised, this will happen and there will be tanks on the street and stuff:

see more funny videos, and check out our Yo Dawg lols!

For Josh Brown and Dinosaur Trader
If I could submit a tune for the TRB Mixtape Section, this would be my pick:

High Speed Internet
Reader Watchtower has joined the new era and upgraded to high speed Internet. Welcome to the monster cable bill world bro! He must have been using it to answer the trivia last week as he won a copy of "Creep" (shipping in the morning). Anyways, Watchtower is armed with a new power, what should he watch?

Here is a quick list:
-Hagler vs. Hearns Round 1
-Hagler vs Leonard Round 9 (skip to 6:54 mark)
-Ward vs. Gatti Round 9
-Randy Rhoads does Revelation Mother Earth on the Tribute album. Entire song is magic, but go to the 4:50 mark to get crazy!
That should get you started.

One of my all time favorite films is "3 O' Clock High". In this scene the "wimp" Jerry Mitchell hires the school football jock to fight the bully, Buddy Revell. It does not go as planned:

Rock Blogging
Rock for the ages.

My friend Au Soleil Levant is the toughest person I know. It happens to be her birthday today and so she gets the lead off spot. Why don't the readers swing on by and drop a happy birthday message? I am sure it would mean a lot.

For the birthday girl, The Dixie Chicks perform "Some Times You Gotta Dance":

Gawains was looking for "Out on the Weekend" by Neil Young and it's a good one:


Seeing that we had some live Ozzy/Randy above, here is the studio version of "S.A.T.O":


Short show tonight. Had this up a while ago, but heard it today so you are stuck with "Jar of Hearts" by Christina Perri:

Have a good night.
Posted by EconomicDisconnect at 8:09 PM

Well, a person can't be something they are not, and I admit I am not a huge fan of boxing, but...my dad is.
I'm going to invite him over to watch these clips with me (I watched every one already, just incredible), I know he will enjoy seeing these, it will be good for some father/son quality time.
Thanks GYSC.

As far as the Ozzy song, the part where Randy explodes at the end is amazing, but I really enjoyed the mix of piano and guitar before that too.

Completely off topic, but of course I'm me ...

Your comment about Friday night and no beer reminded me of my train of thought last night.

It was two in the morning. And I was ... stone cold sober, sitting in a movie theater parking lot waiting for my daughter to get out. I can't think of the last time I was out at two in the morning without being under the influence of substances or bad company.

The moon looked really pretty ... get what I mean?

Watchtower,
saw that hagler/hearns fight live with my Dad as well as the hagler/leonard fight. Good memories of him. Yes, the ending to that tune is great and then it goes right into steal away the night which is sick as well. Glad you liked it, enjoy the broadband!

Hey Klo, long time no see! I was actually kidding, I never had a drink until I was 21 and 7 months old! I think I know what you mean though. Thanks for stopping in.

I thought this was Stagnation Friday! ;)

Happy Friday! Have an awesome weekend, my friend.

Thanks for posting my birthday pick! I had a great day and getting my song up was a highlight. I also love the song Jar of Hearts, so good thing I didn't request that one!