Panic on Friday Night? I Think Not!

Hoping 2016 is going well for the long time readers. And well for all. 2015 sucked royal, and I am glad to see it go. I got my dream job, but on almost the same day my Mother in Law (who has lived with us for 8 years) was diagnosed with terminal kidney cancer. This was last June. Things went spectacularly bad fast and I wish there was some way to console my wife. Mother in Law passed away in November. Things are still not that "normal" around here. Maybe they will never be.

Panic? Already?
I cut my teeth in the professional world in 1998. In finance during the cauldron of 2000. I have seen some stuff over the years, I am sure you have to. I don't follow the markets all that close anymore, but it's cracking me up how in a panic everyone is over this "correction" that may well wind up being another blip with a V-shaped recovery in like 3 days as it's been for a long time. If you traded and survived the summer of 2011, this is baby wipes. What a bunch of pussies the Wall Street type are, geezus.

I mean, look at this: 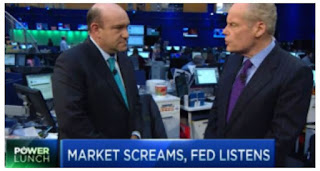 Where are the old school Minyanville writer when you need them most? A guy like "Mr. Practical", Kevin Depew, and Todd Harrison would do magic on this kind of thing. Sadly they moved on. I can't speak for them but I quit this stuff around the same time too. Coincidence? Smart, rooted, and thoughtful people have no place in this market.

Random Thoughts
- so... a 0.125-0.25% raise in a zero rate world has caused all this market mess? OK.
- the FED knows all when it's helping, but nothing if anything goes wrong. Got it.
- Todd Harrison wrote long ago that the Internet is THE most deflationary invention of all time. I agree 100%. I cannot understand why nobody else seems to be able to grasp what this means for the big picture. I don't get it.
- I asked in maybe one of my first 4 blog posts that IF the 1999 spending bonanza crazy times was the US economy at 2X what it could do, and 1X was normal, why is the FED always trying to get back to 2X? Nobody in a decade has tried a response. Not even Cullen Roche. Certainly not Conor Sen. The answer to this question is really important.
- My beloved Patriots are going to lose tomorrow to a healthier, better team at this point. I am ok with that for some reason I don't understand.

Ya SUSPECT!
Look it's not my job or hobby any more to try and enlighten you all. Enlightenment comes from within or some shit like that. Allow me to say something about US auto sales and specifically the so called "average car age" stat:

There is NO WAY the average age of US autos is 11 years. For the life of me I could not find out how this is even calculated. I am going to guess that old beaters (any left after cash for clunkers???) get re-registered by the real low end of our society. Instead of viewed as a poor indicator (wow the lower income bracket cannot make way into another bracket and hold on to old cars) it's looked at like pent up demand. Look around you, how many 11 year old cars you see on the road? In your company parking lot or garage?

This stat is FAKE.

Add in the wild channel stuffing (hat tip to the ZeroHedge folks, they are right more than wrong) and crazy loan terms (I bought my Camaro for cash, but they offered me a 72 month payment plan? Asked my wife is she would co-sign for car? My wife was like "He will just pay cash, thanks") car sales are high. It's fake.

Lot of fake out there, but the game will go on. You know it will.

If you want a basic on where we are, Kevin Depew's seminal essay is the best thing I have ever read:
The Crisis of the Real by Kevin Depew

Panic on Friday Night? I Think Not!
We don't panic, we rock and roll on Friday night!

For the Wall Street folks who might be down 10%, "Somebody Save Me" by Cinderella. Live in Philly 1991:


Instead of watching "Queen Bee" gyrating on stage like she has a muscle twitch disease and pretending she is all that, watch a real performer doing her thing. Pat Benatar live with "Shadows of the Night":


I am turning 40 this year, so maybe it's that, but when I really got what Don Henley's "Boys of Summer" was about, I cry every time I hear it. Hint; it's not about a girl:

On a lighter note, Men at Work and "Land Down Under":

Tito Y Tarantula and "After Dark":


Have a good night.

Posted by EconomicDisconnect at 8:44 PM 14 comments