The good news:  I am finally feeling much better! Like MUCH better. Energy is coming back online and feeling pretty good. Nice.

Land of Confusion
I have always been more a macro kind of investor. By that I mean I try to find things that will persist for a long time, get positioned, and basically forget about that stuff unless something major happens to change my mind. In that sense, not much has changed in 10 years; easy money is now a structural part of the world (predominantly the US) and this cannot really change without severe consequence. Lack of political will and a close alliance between big money, government, and central banks makes any reform and associated "pain" impossible. Of course this kind of wait and see thing is boring!

On a more immediate term time scale, the last 2 years have been absurd and exciting more so than any time since I have been following markets. Maybe some of the more seasoned players can name another time that has featured so much "never before seen" kind of stuff.

In any case, this blog started as a critique on the disconnect between perception and reality. Today we have none other than the Federal Reserve Headmaster himself, Albus Dufusdore Ben Bernanke, making a fool of himself and the US central bank on a grand scale. As this happens market players the world over cling to every word and action as if Bernanke can accomplish anything.

First up, a screen shot of the headlines running yesterday on FINVIZ after the FED minutes were released:

A "sliver" of hope for more stimulus! Joy!

I read the release and it was a twisted hunk of confusion, though that part missed CNBC:
On the one hand, a few members noted that, depending on how economic conditions evolve, the Committee might have to consider providing additional monetary policy stimulus, especially if economic growth remained too slow to meaningfully reduce the unemployment rate in the medium run. On the other hand, a few members viewed the increase in inflation risks as suggesting that economic conditions might well evolve in a way that would warrant the Committee taking steps to begin removing policy accommodation sooner than currently anticipated.
Got that?

Given the backdrop of a FED that has maintained that any inflation anywhere and the unemployment rate being high as transient, and seeing they believe growth will accelerate in the second half of the year it seems early to call for more stimulus. You see the problem? They say one thing then set up another.

Bernanke was in front of CONgress today and he has now changed his tune to one more apt to declare QE 3 than call for GDP growth of 4% in the second half of the year. That was fast! Josh Brown notes the following words that would be hard pressed to inspire confidence in anyone:
"The sense is that employers are becoming more willing to hire and I think we'll start seeing some stronger payroll reports and some lower unemployment rates pretty soon."
"Pretty Soon" is one of those non starters that mean "fugget about it!". "Hey hunny, when can we do that crazy-sexy thing we did on vacation with the feather duster and the lighter fluid?" "Pretty soon dear, really". Yeah sure.

Today was lauded as a QE 3 green light, but it was not quite that bold in statement. What gets me is that the FED has maintained the second half recovery line, as has many analysts, yet a few words about more easing is seen as a needed policy right now. Where is the consistency? What can you believe?

Short term I am confused. The whipsaws going on daily are just too much for any trader not glued to the screens and ready to pounce to do much about. One day Greece is saved, the next it's not and neither is Italy. Until noon, then both are fine. On a Friday we get an ISM that beats expectations so the accelerated growth is at hand so things rally, then on a Tuesday poor economic performance is cause for QE 3 so we rally again. You cannot square this thought process, it is imbalanced.

I am not the only one seeing the confusion, here are a few links:
Kid Dynamite - So, FED members Said Some Stuff

Remember that QE 2 was hinted at in August 2010, then rolled out in November. Using UGA as a gas price proxy, lets see what we can see (click for larger view): 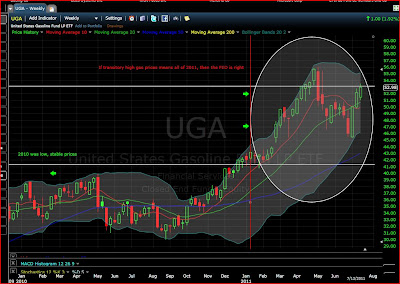 Notice that when QE 2 was hinted at, UGA was around $33. In November it was around $36. It then took off, hitting the upper bollinger band for a LONG time and still sits at $50 or so now. So the FED wants to add on to the pressures here, now? Ok.

In any case it seems a bull market is upon us because either things ARE great or QE 3 WILL make things great. At least a bull market in equities and commodities anyway. Don't expect any change in anything that may mean anything to a normal person anytime soon. Well, maybe pretty soon.

Have a good night.
Posted by EconomicDisconnect at 8:42 PM

You're confused? Buddy, this is SNAFU, situation normal all fucked up.

My recommendation for Friday Night Entertainment is, Neil Young, "Out on the Weekend."

There's certainly a great deal to know about this topic. I love all of the points you've made.
Here is my page : slots for cash

Hi there everyone, it's my first visit at this site, and paragraph is in fact fruitful for me, keep up posting these content.
Here is my web page - casinos online for usa players

I do not know whether it's just me or if perhaps everyone else experiencing problems with your site. It seems like some of the written text within your content are running off the screen. Can somebody else please provide feedback and let me know if this is happening to them as well? This may be a problem with my web browser because I've had this happen previously.