What Are the Right Questions?

What Are the Right Questions?

[Leaving?] "So soon? Without any of those answers you so longed for?"
"You said there are none."
"But you asked the wrong questions."
-Louis and Armand in "Interview with the Vampire"

Dealing with charts and technicals is pretty clean cut. My chart last night (in which I cut off the value numbers, smooth) updated today: 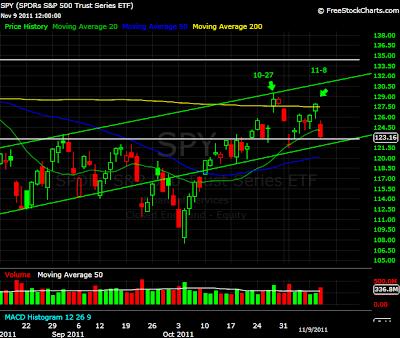 So today's rout drops the SPY to the bottom of the range I am keen on (white lines), right around 123 (equivalent to S&P 500 1230). The upward channel(green lines) still has a little room under that before being violated.

My man Swoon has a 60 minute chart that shows a pretty decent head and shoulders pattern. See it here. The neckline coincides with the areas I have marked.

So either it holds here or it breaks. Or it breaks, then reverses. Or something.

Bigger picture I keep wondering if I have been asking the right questions. Italian debt woes sunk the market today as yields reached a level that scared markets. The ECB is expected to resort to FED like printing to bail out the Eurozone, but when this happens remains to be seen. Talk of a smaller Euro that focuses on deeper integration and scuttles some of the periphery is making the rounds. What that would mean is any one's guess. Most of this is known and made little difference in a rally that was going higher for a month.

But are the right questions being looked at? The big three in my mind right now are:

1.) Greek CDS being called off is having ripple effects in debt markets. The idea that protection via credit default swaps will not be actionable may be causing large debt holders to scramble.

2.) Margin games are not something to be taken lightly. Everyone was laughing when silver margins were increased but now margins for Italian bonds are being raised and that is not funny all of a sudden.

Margins in commodities were lowered (Kid Dynamite gets it right) but the spill over has come from MF Global going bankrupt. Peter Brandt has a lengthy discussion here on what it means for futures traders. I am not one, but it's a deep and necessary part of the market:
MF Global — 2011′s version of 1929


The failure of MF Global”s segregated account to be made whole would be the biggest financial disaster since 1929 and would spell the end of the futures industry as we know it. Folks in the financial industry should take this matter seriously — very seriously. Do not underestimate the importance of this matter.

I cannot say I am knowledgeable in this area, but Brandt sure as hell is.

3.) Greece restructuring along with the MF Global bankruptcy is calling into question what debt and money is actually worth. The notional value of money as I call it. Add on a municipal debt default (Alabama Jefferson County) and no wonder fears are running high.

After climbing the proverbial "wall of worry" it seems the three questions I outlined had no easy and fast answers.

Have a good night.
Posted by EconomicDisconnect at 8:08 PM