Rise of the Machines

Stress can be a funny thing. Most of the time it just kind of sits there and you are aware of it, but as long as it keeps cool and does not get too rowdy you can accept that it is around with no problems. Other times you look up and notice there are way too many of them around and they are acting like it is last call! Today was sort of an accumulation of various strains and I am a little bit wiped out. Good thing it is Friday tomorrow! Get your requests in for the show tomorrow night. I know Lurker already has.

Tonight will be a more fun themed post though it is based on something I saw today.

Rise of the Machines
The last 6 months have been really rough at work. This has been true across my entire field (I know some readers really know what I mean!). Today I saw a presentation by a firm that builds robotic automation systems. I will not get any more specific about that and how it applies to what I do but I can say with 100% conviction these systems can (and will?) cut workforce by anywhere from 10%-30%. Usually cost is prohibitive in these kind of set ups. Not any more! It was a little unsettling.

A while back I had a poll up asking what would be the next bubble. I listed "Robots" as a pick and I was the only vote for that category. I am liking that pick more and more.

So how close are we to Skynet becoming self aware, or how close to becoming copper tops? Here are a few things to consider.

The human hand, long thought by all to be impossible to model by mechanistic means, may be closer than you think. The shadow knows!: 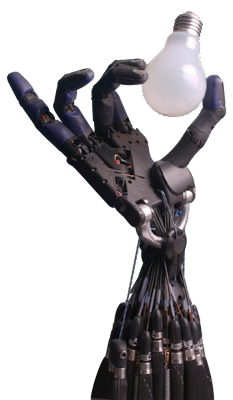 Made by the Shadow Robot Company in London. Plenty of links at the Wiki entry. 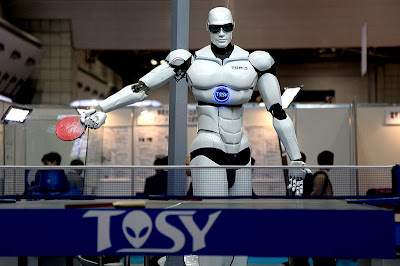 But did you know about the YVH-1 robots that fought the Yuuzhan Vong in the expanded Star Wars Universe? Of course you didn't!:

We are jumping ahead! First, we must overcome the "Uncanny Valley" which is:

Mori's hypothesis states that as a robot is made more humanlike in its appearance and motion, the emotional response from a human being to the robot will become increasingly positive and empathic, until a point is reached beyond which the response quickly becomes that of strong revulsion. However, as the appearance and motion continue to become less distinguishable from a human being, the emotional response becomes positive once more and approaches human-to-human empathy levels.

So you have to start small.

Who has one of these?: 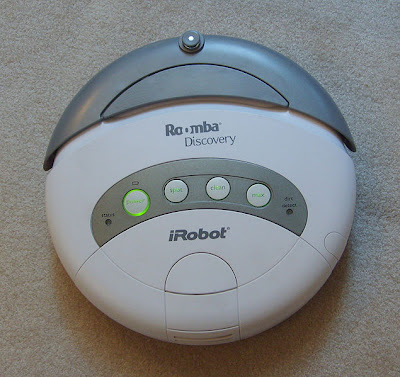 A good foot in the door, yes?

And now, even soldier robots are made to look like dogs:

The Boston Dynamics BIGDOG robot. That would scare me big time!

It is not all bad, maybe nano-robots could scavenge your blood lines and cells for clots or cancer. That would be good, right? Unless they are controlled by the government.....wait I wanted to stay off that line!

I often am reminded of the line spoken in the film "Jurassic Park" by Dr. Ian Malcolm:

Yeah, but your scientists were so preoccupied with whether or not they could, they didn't stop to think if they should.

During the Great Depression, many just could see the next paycheck, or their next meal if one was coming. Still that era was filled with dynamic progress and ours, I would hope, will be the same. I just cannot get over the draw to fighting the tide, the rocks always lose, how do you think beaches are covered in sand?

Have a good night.
Posted by EconomicDisconnect at 7:17 PM

Whoa! I almost felt like a writer on that last line!

don't forget about this guy:

gonna steal all our housekeeping jobs...

The last line I thought was pretty good, sand and rocks.

Quality posts is the main to invite the users to
pay a visit the site, that's what this site is providing.