Almost Friday! You know that means to get those requests in for the show tomorrow.

The Food Business
Seeing that eating out is the new American past time, I try to keep an eye on news in that sector as a measure of how things are going. Two great works on this subject to share.

My friend Mark of Illusion of Prosperity has some really thought provoking charts up that are worth a look here:
Long Term Restaurant Sales Prediction
Chart from Mark: 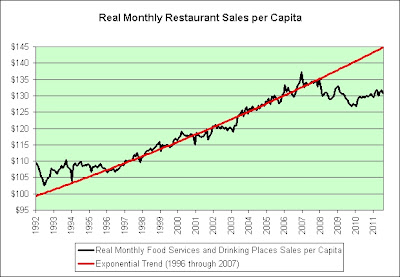 I thought this was very interesting and in a post about spending I dropped a link to Jake of EconomPic.

Jake did some more work and arrived at this chart, important too: 
While not a surprise, this is rather concerning. I recently outlined that bottom earners have been earning less for the better part of the past 15+ years and it looks like it may be actually impacting the dietary habits of Americans (i.e. eating less [unlikely] or eating cheap / unhealthy food [likely]).

Worth thinking about. Thanks guys! 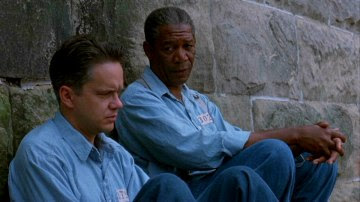 "Let me tell you something, my friend. Hope is a dangerous thing. Hope can drive a man insane." - Ellis Boyd 'Red' Redding

First off be warned I have a few line rant to start. The Unlimited Dollar funding machine announced today to ease lending conditions in Europe is another proof of the theorem that nothing has been solved, only set aside. Interbank lending had become very tight, and most will say it is because banks are nervous about what other banks hold as assets so they don't want to lend even in short time frames. This is true but not correct. Bank know EXACTLY what they have themselves, and know it is garbage. They also know other banks have the same stuff. Thus the lack of faith in bank assets, they all know the real score. 3 years after Lehman Bothers failed (Happy Anniversary!) the swapping of garbage collateral for real cash continues unabated. It must be transitory.

Last summer things were bad but the FED came to the rescue and market players allowed the hope that more easing and more accommodation would turn around a ship that was in real trouble. It took a while for the data to get better, but markets lifted anyway, on the hope that it would get better. Remember all the games with "second derivatives" and "getting worse more slowly"? Yeah that.

Are we back there?

The numbers now are no where near as bad as last summer, but the direction is not favorable. More and more companies are lowering guidance, and not by small amounts. Unemployment is rising again and I could go on. Will it matter? When hope gets ingrained it takes a long time for it to be dashed.

The FED moves again next week and today's CPI print (did it get lost in the news?) was high enough that the FED should be on hold for aggressive easing. Operation Twist is a go, but will lowering long rates by .2% really do anything?

There is fundamental thinking, and there is reality. The reality is that hope is here. Unlimited dollar facilities? FED moving? Money managers WAY behind this year and need a run? All are a yes. Last years "Head and Shoulders" top is this years "Bear Flag" which is now too long to be such a thing (iBankCoin's ChessNwine was the first to discuss this BTW).

The only monkey in the wrench is that earnings guidance and then reports come in so poor that it cannot be fought. This is key going forward and needs to be taken very seriously.

Tomorrow is the close of Option Expiration week. If no drama occurs I will be back on Sunday night doing real homework looking to use the hope factor to make some trades. Sentiment is turning, fear is here but it's the fear of missing out. Plenty of ingredients for some positive market action. I have about 7 screens that I built in The PPT that are very strong and I am looking to trade.

Have a good night.
Posted by EconomicDisconnect at 8:51 PM

Hold on, I meant climbing the wall of worry.

I'm clearly getting my bullish and bearish metaphors confused. ;)

I read a comment from the super astute Bill at Calculated Risk today that said the dollar liquidity plan might work.. that flummoxed me: for that to work, you'd have to think that we have a LIQUIDITY problem and not a SOLVENCY problem.... oy vey - this again???

Stag, you are too smart and too clever for words!

Kid, I fell out with CR a long time ago. FED supporter no matter what. I covered the real deal in my post about bank lending.

There seems to be three types of people.

1. It's a liquidity problem. It's a cyclical problem.

2. It's a solvency problem. It's a structural problem.

The real problem is overvaluation and fraud.

The food chart is very interesting. I know people that can't pay their bills on time, but eat out almost everyday. And not healthily, either.

For some, it's their only pleasure, having someone else to cook them a burger, while they work 2 jobs just to make ends meet. For another, it's cheaper to order a combo meal, than to cook up something healthy. It's not good no matter the reasons.

Your picture contest was way too hard for me yesterday, but I'll be putting in a Friday request later. I have to go pick up a computer to work on, then I'll be baaack!

You know, Meatloaf is one hell of a performer. And that girl is totally hot.

First off be warned I have a few line rant to start. The Unlimited Dollar funding machine announced today to ease lending conditions in Europe is another proof of the theorem that nothing has been solved, only set aside.