There was a big accident on the highway I use to get home so I am way late and short on time. Not that anything interesting happened today anyways.....

Long See-Saws and Rubber Bands
First off lets give credit where credit is due. Josh Brown of The Reformed Broker fame has been making calls that would be helpful to listen to. From going to cash last Monday to suggesting a Face-Ripper rally would happen, it's all working out. The Face-Ripping theme has exploded all over the place, some where put in mind of this Oscar winning film: 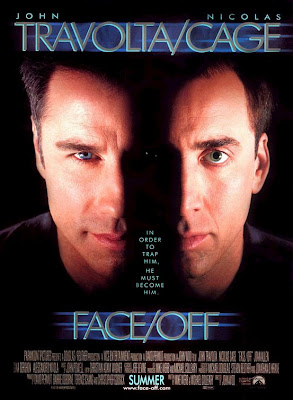 The FED signaled today that they will never raise rates ever again. This was new news I guess, but you have been reading that here for years. Low rates are a structural necessity of our "new" economy, there will be no going back.

Markets opened way up, about crashed lower, then rallied to new daily highs. It was pure mania all around.

All time low yields on the US 10 year are suggesting an economy that is going to further slow.

Markets are so volatile right now only people sitting at a trading station can play this market. If we are in for a multi day rally here, key levels to watch will be S&P 500 at first 1180 (probably bust that at the open) and then a test at 1200. Fast chart below: 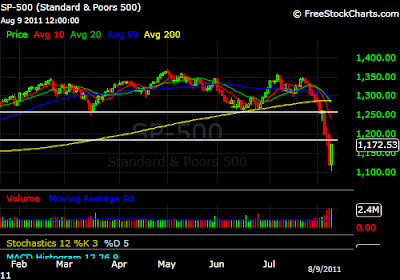 The 10 year and the FED declaring no end in sight for their accommodating stance implies real weakness going forward. Maybe that has been priced in here. Maybe not. For me I am still waiting for some stabilization here, a bit higher, or a bit lower to get involved. If I had to make a call I would say today was bears and shorts getting out while the getting was good and a lack of pressure on markets made them explode higher. Not exactly a trend situation.

Have a good night.
Posted by EconomicDisconnect at 8:10 PM

GYSC, if you could sit and watch this current market every minute of the day, would you have tried trading it these past couple of days?

Great question. If I could have sat here and watched the action like a hawk I would have shorted since last friday, I think I am 100% sure of that. Of course I would have lost most of that today! Glad I can't, it's just not my trading style, way too fast. Fast womwen, yes, fast trading no.....

I think Face/Off was on TV the other night...

I'm kinda' glad I've been too busy to watch the market all day long. I'd be losing even more hair than I already have. I'm with you on wanting it to just stabilize a little.

Josh has been on quite a roll lately!

Ms. Hillier's book arrived today. My mother took it, so I probably won't be able to read it for a few more days.

This is what she does. She wakes up around 4:00 AM, makes a pot of coffee and reads a book. Last month she found a discarded box of Agatha Christi books in a repossessed home. She brought them home and promptly started reading.

Then she comes over every morning and tells me about the book she's reading. Now she's into Tom Clancy. Last year I bought her a copy of Sarah Palin's book for Mother's Day. She loves Sarah Palin, but that was a mistake on my part. She kept coming over and reading passages from it to me.

Do you mind? I'm trying to do a market analysis and write a price opinion here. I didn't buy you that book so you could read it to me. Good grief.

Anyway, when she gives me back the book, I'll read it and do what I do, or used to do. Take notes and write a critique.

Having only seen it once and having only read the back cover, I will say that it does look interesting. Hard cover, very impressive, Ms. Hillier.

It takes a lot to get a book published these days. Mostly I'm into the classics: Homer, Virgil, Dante, Chaucer, Shakespeare, those guys, plus a good number of poets. I read very little contemporary fiction. But I will read this.

The thing with the publishing industry is this. It's the same with just about everything else--the marketing guys took over. Editors don't matter anymore. Just like in Hollywood, the producers took control from the directors. Problem is, producers don't know how to tell a story; directors do.

I've never submitted anything for publication, because I don't deal with editors well. I write what I write. My professors in graduate school thought I was brilliant. When I submitted my thesis, my advisor said it was the most original work on Blake he had read in 40 years.

Then he started to tell me, you need to change this or that. No, I'm not going to change one word.

Editors, get out of my face. I just can't deal with them. And the marketing guys? Forget about them.

That's where I am. I will read the book and offer my honest criticism. But it does look promising.

I don't like artificially lowered interest rates. Just shows that we are a credit driven society and not a savings driven one. But, as our government has shown us, you can't just keep borrowing forever. Actually, they may have shown us the opposite.

My pick for Friday night is London Calling by The Clash.